The school is dedicated to Francesca Frixione Opened March 26, 2018

Current numbers at a glance:
182 students (including 27 nursery);
nursery from 4 to 5 years, school grades 1/8, from 5 to 13 years;
6 classrooms, plus 5 classrooms built by the Nepalese government;
11 professors (with the principal), 2 professors are funded by the community;
maximum distance traveled by the students from home, about three quarters of an hour by road;
located in Katunje Vdc, Bhaktapur District, about 15 km east of Kathmandu;
coordinates 27 ° 42 '12' 'N - 85 ° 19' 38 '' E.

The birth of the school dates back to 1980 and in 2006 it was donated to the community. The structure of the school was reduced in very poor conditions and the numerous children who attended it were running great risks, especially during the monsoon season, to suffer sudden collapses. In addition, they attended classes in classrooms that were not very hospitable, as they were full of humidity and water infiltration.
Hanuman Onlus visited the school in 2006 and considered it absolutely right to start this new project in light of the dangerous conditions of the existing structure.
The previous building has been replaced by 6 new classrooms, equipped with all the teaching material necessary for both professors and students.
After the first intervention of March 13, 2008, we proceeded to a further important expansion of the school, with the construction of the entire second floor, inaugurated on March 15, 2012.
After the earthquake of April 25th 2015, we proceeded to rebuild the school.

The School inaugurated on March 26th 2018 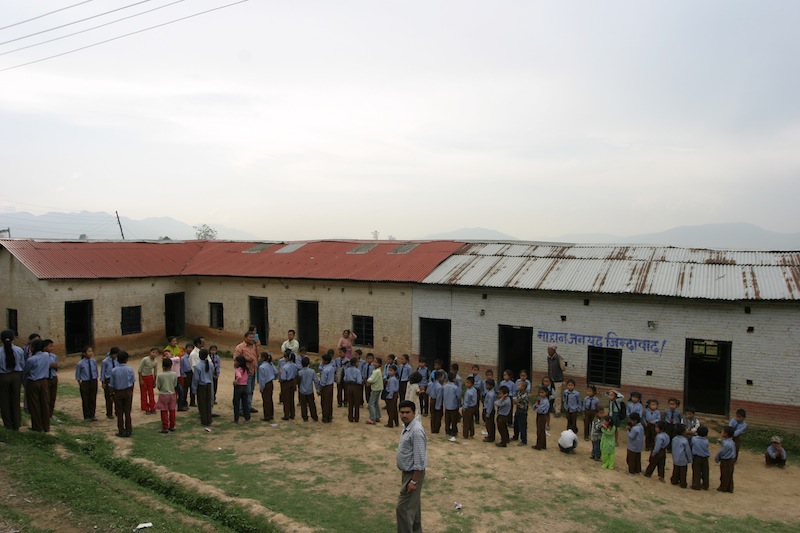